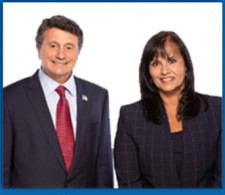 NORTH CALDWELL, N.J., September 15, 2020 (Newswire.com) - Cynthia Santomauro and John Chiaia, Republican candidates for Borough Council seats in North Caldwell, have been serving their town government and civic causes for many years. This election cycle, they are making fiscal responsibility and green space preservation key issues in their North Caldwell First platform, supported by Citizens to Re-elect Santomauro and Chiaia.

“John and I have helped avoid tax increases for nearly all of the past 10 budget years, and we worked on the borough’s purchase of Walker’s Pond to save it from development,” said Santomauro. “We will continue to fight for preserving green space in North Caldwell.”

Santomauro and Chiaia are championing several new initiatives while continuing to advocate for ongoing matters within the town. Among them are:

·         Restore Walker’s Pond – Successfully advocated for the purchase and restoration of Walker’s Pond; plans are to offer this open space as a public park for passive recreation.

·         Improved cell phone service – Working to contract with new providers so the entire town will have strong service.

·         Eliminate power outages – Institute and require an improved PSE&G tree pruning standard around power lines for well-shaped trees that pose no risk to the power supply during future storms.

·         No tax increases – Continuing their multi-year record of no municipal tax increases, following good government practices to maintain the quantity and quality of town employees and services without raising municipal taxes.

·         Traffic and public safety – Instrumental in having a traffic light installed at West Essex High School and a left turn lane created at the busy Route 23 intersection, they are pushing for more town-wide safety measures.

·         Recreation improvements – They brought major upgrades to North Caldwell with the new Liberty Park turf field and walking track, a new dog park, a new splash park at the town pool, improved senior recreation programs and the acquisition of Magnussen Field for $1.

Santomauro and Chiaia are running for re-election in a contested election; Democrats Matthew Atlas and Anthony Floria-Callori were write-ins during the July Democratic primary election. Chiaia noted, “Local politics is non-partisan; it is about putting North Caldwell First. Our voting record, proven accomplishments and vision demonstrate our dedication to preserving an excellent quality of life for all North Caldwell residents.”

Their bios and platform are at www.NorthCaldwellFirst.com.